Mojácar impresses you at a distance. The majestic assortment of white houses, winding around and clinging onto the foothills of the Sierra de Cabrera is imposing to the traveller. Once inside the labyrinth, you discover a more intimate beauty between the narrow streets, adorned with intensely coloured flowers that stand out against the white walled houses and the intense blue sky. Every corner you turn captivates, reminds you of its Arab history and teaches you about the everyday lives of the townspeople. It is not without good reason that the Old Town is internationally recognized as “One of the most beautiful villages in Spain”.

And, from the viewing points, you can enjoy the most beautiful horizons, both towards the sea and inland 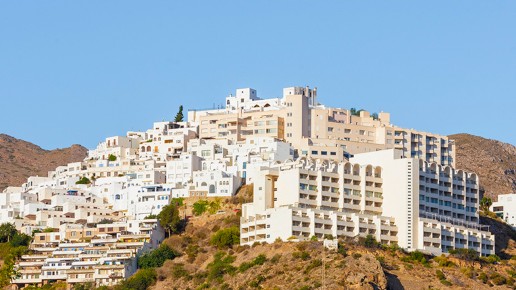 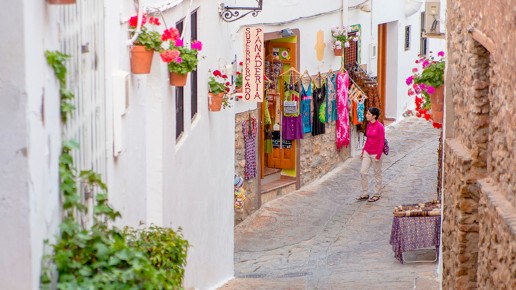 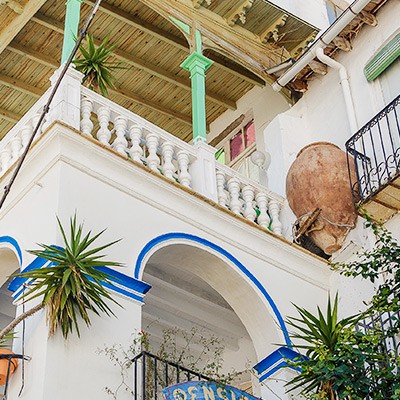 The sun shines on mojacar most of the year. The fact that Mojácar enjoys more than 3000 hours of sun per year means that the average temperature is about 20ºC.

Winter is practically non-existent,It goes by as if it were Spring with the sea temperature higher than that on land. Mojácar`s special climate makes the winters appear very mild in comparison with the rest of the South . As for the summer evenings here in Mojácar are just made for a relaxing moonlight stroll along the beach or though the village streets. The water temperature is higher than the air temperature  which means you can enjoy a dip in the sea almost st all year round (surface temperature 21 – 30ºC in summer and 10 – 15ºC in winter. From 100 to 200m. the temperature rremains constant, between +13 or -13). 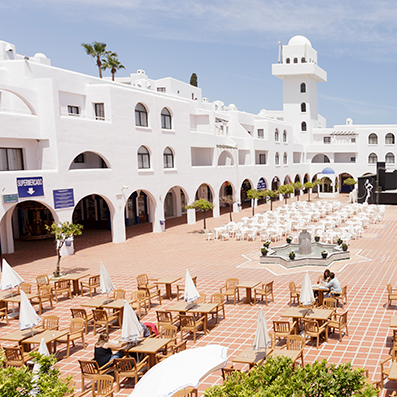 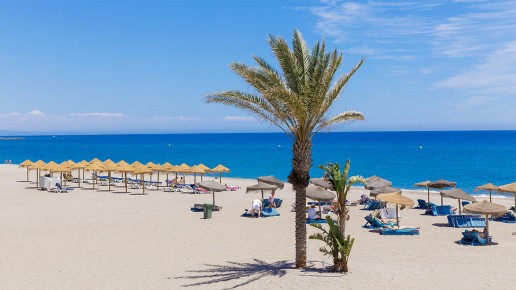 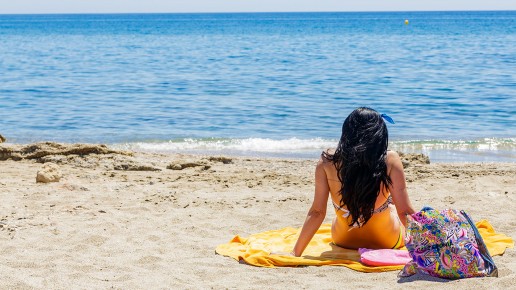 Since ancient  times many peoples and cultures have lived in this municipality, an area coveted by all. Mojácar, due to the lookout position of its village, its coast, its mild climate and its current standard of living,is a very appreciated place. Its people have an open and friendly character, used to sharing and chatting with visitors, who in many cases end up as neighbours. They are respectful with their environment and decorate their facades with pots and flowers.

When a visitor arrives in Mojácar today, they immediately notice the diversity and quality of the menus in the restaurants and bars. A quality which was not handed to us, but which rather was inherited and which has been elaborated on over time.

For some time, the restaurants of Mojácar have been making very significant leaps forward in regards to quality. The presence of well trained professionals, has contributed to this change, plus Mojácar has a very competitive catering college which trains youngsters from all over the area. Aware of the importance of maintaining our culinary heritage, we embrace the authentic flavours of those simple dishes and stews which played a big part in everyday cuisine and which were so loved in past times, and which our visitors remember and look for on their return. Among these are the “gurullos”, meatball stews, pepper soup, “migas”, rice dishes and even cous-cous, the fruit of our Andalucian heritage.

Among the most common fish in the area, we should highlight 'gallo pedro', which is excellent grilled or fried, the 'espetones' spits (grilled fish, inserted as a skewer) of sardines or mackerels, grilled or fried squids, anchovies or in vinegar, the in sauce sepia, the octopus to the vinaigrette or the exquisite prawn of Garrucha. There are other delicious fish such as 'galanes', mullets and 'palometas'. 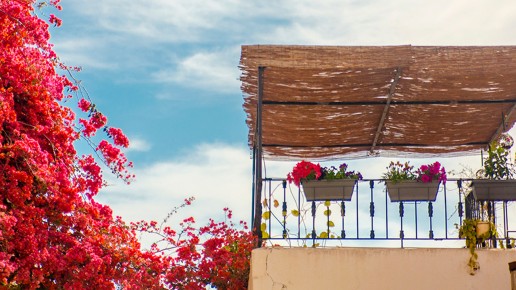 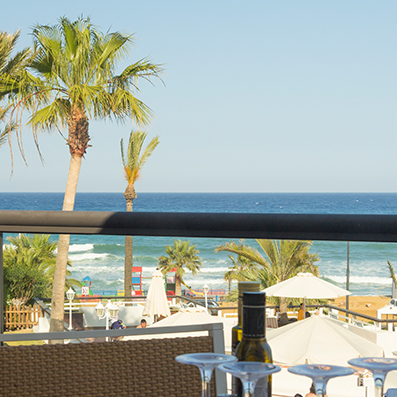 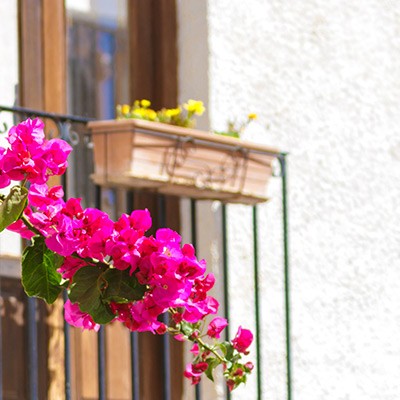 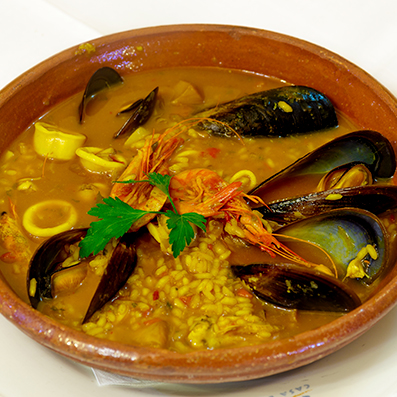 The houses in Mojácar appear tocling to the mountainside creating a great visual impactl: the white of the houses, the brown of earth and the blue of the sea and the skyr. he roofs are flat or terrace, giving the impression of cubic houses, impenetrable, where from outside tourists cannot see its labyrinthine and steep streets. In the past, people used adobe and stone, forming vaulted ceilings but today, white is the main colour of Mojácar´s architecture.

Mojácar village consists of grouped houses, graduated and adapted to the topography and traditional architecture of the land. The dominance of the mountains on the hollow cubes, forming more or less white monochrome geometric shapes, are some of the aesthetic conditions of the village houses.

The core of recent growth at Mojácar Playa offers some recent buildings, varying from detached single-family houses to groups of properties. 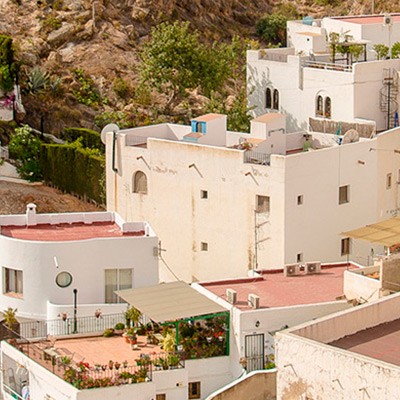 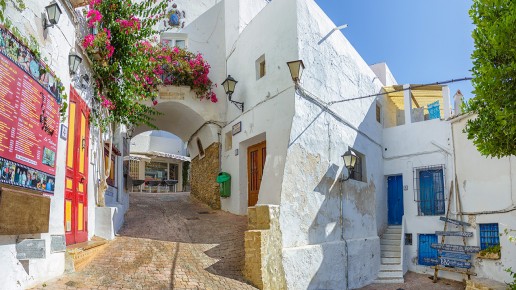 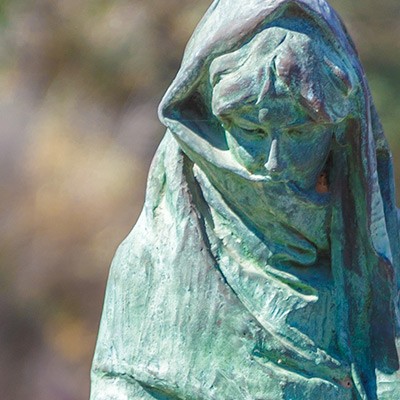 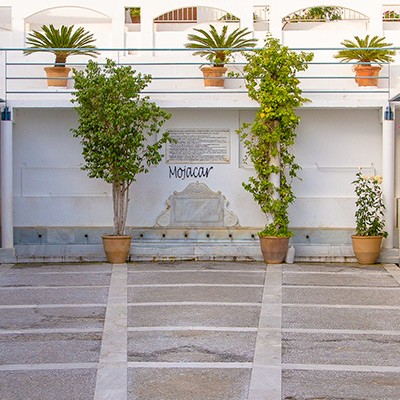 Mojácar’s 17 kilometres of coast stretches, rom Marina de la Torre (in front of the golf course), on the border with Garrucha, to the Granatilla dry river bed in the impressively pretty outlying Sopalmo, just a few kilometres from the beginning of the Cabo de Gata – Nijar Natural Park, next Carboneras the municipality of. Visitors can enjoy virgin beaches, ideal for the most solitary, as well as more touristy beaches with numerous services.

Awarded European Union Blue Flags or immersed in quality plans, the fine sandy beaches are the most popular with families, where there is the offer of a range of leisure activities and all services are available: The beaches of Marina de la Torre, El Descargador, El Cantal, Cueva del Lobo, Las Ventanicas and Venta del Bancal, among others. Along the road to Carboneras is the tranquil Macenas beach, looked over by a defence tower erected right next to the sea and presided over by its castle, from where one can see the Peñon Cove and Sombrerico beach.

The southern zone of Mojácar allows for the more adventurous and natural enjoyment of the coastal paradise formed by coves such as Bordenares, El Lance or Cala Granatill, protected for practicing naturism, they are immaculate, unspoilt coves with abundant marine life. 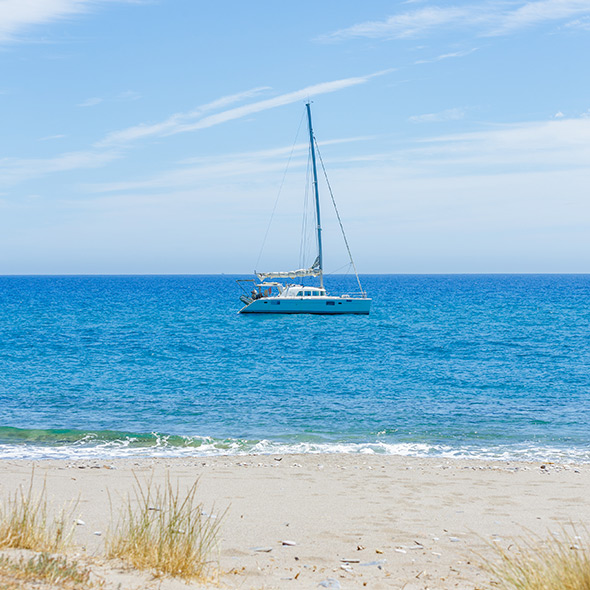 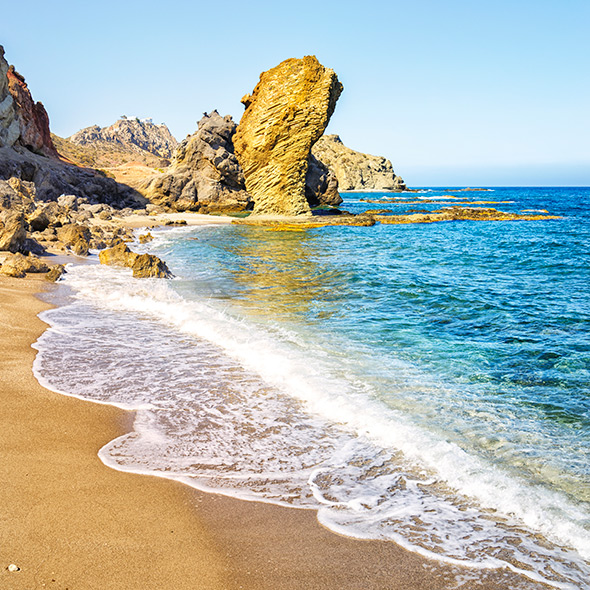 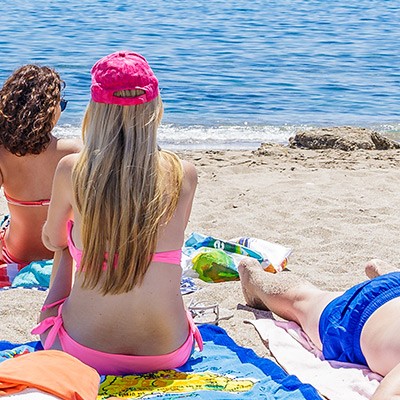 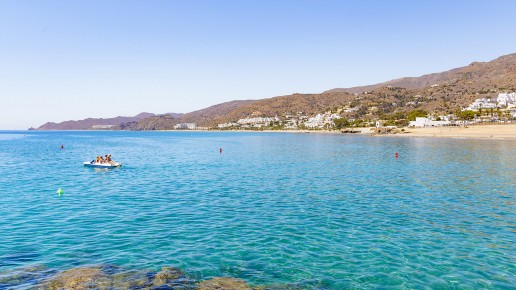 The urban structure of Mojácar is undoubtedly one of its main attractions. The intricate labyrinth of its steep streets, the white of its village and its hanging position on the last spur of Sierra Cabrera form a set of great beauty.

But the municipality also preserves rural and natural landscapes of great cultural value, highlighting its virgin beaches of volcanic origin, the “cortijadas” (group of houses) of Sierra Cabrera, ravines, etc.

One of the best ways to get to know Mojácar is to go up into its sierras and hills via tracks and paths. From where there are views which stay imprinted on the eye due to the special light, the contrast of the hundreds of shades of the blue of the sky and the sea, along with the white of the village’s buildings, with their eastern flavour. The scenic values of Mojácar is incalculable.

Its nature is alive, rich and diverse, as much from the botanical as the zoological point of view. And is where we find birdlife in the wetlands of the lagoon, at the mouth of the river Aguas Mora Tortoise, a protected species which is found in lowlands with scarce vegetation. Mojácar’s countryside smells of rosemary and thyme, yside-by-side with broom and esparto grass, and vegetation only found in this area and of great scientific importance, such as Limonium Estevei (known as Ever Living Mojaquera).

We cannot forget Mojácar nestles in the foothills of the Sierra Cabrera, with its irregular profile of crests. Standing out are its diverse and rugged landscapes, which range from dry river beds to oases of vegetation, forming weird and wonderful volcanic shapes running down to sea leve. 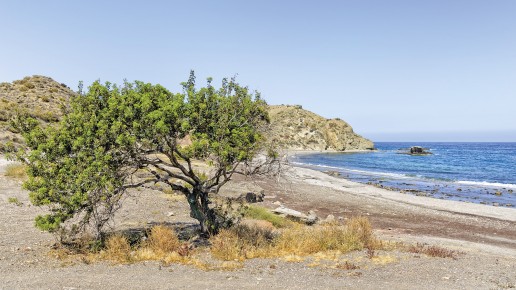 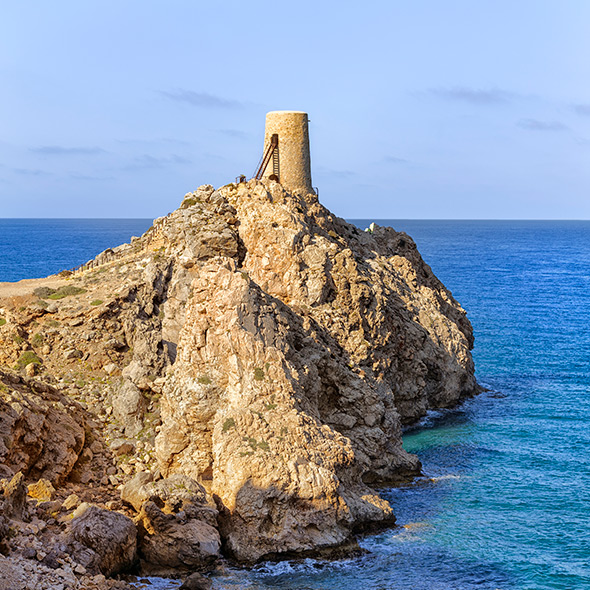 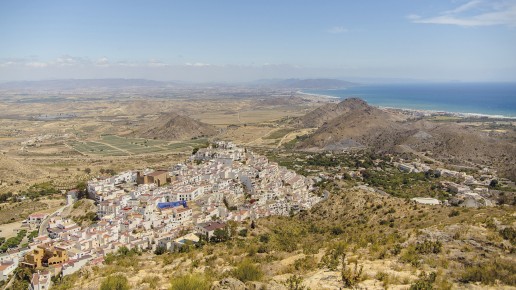 Mojácar, quiet and calm, becomes very lively during its festivals, in which are evident its past, its culture and the art of its people. Of special note are Carnival (February), St. Augustine (August) and Moors and Christians (June), the latter a very beautiful and colourful receeation of historical events.

CARNIVAL. February. Taking place before Lent, this pagan festival fills the streets with people wearing highly original costumes and fills the air with original songs. The procession along the main beach road is a colourful musical extravaganza.

BURIAL OF THE SARDINE. Ash Wednesday. Literay the Sardine´s funeral, this celebration, taking place one carnival is over, signals the transition from earthly pleasure to spiritual contemplation.

ANDALUSIA DAY. 28th February. This day is celebrated with various concerts, in wich the different municipal schools of music and dance always play an important part.

DIA DE LA VIEJA. The first Thursday in Lent. This is a day when the whole family goes to the countryside to enjoy a picnic. According to ancient tradition, “la vieja” or old woman, (a rag doll made on a wooden cross frame, dressed in tissue paper and whose head is full of sweets) is stuck into the ground. At the end of the day the doll is broken open and the sweets inside eaten.

HOLY WEEK. This celebration hovers between mysteries of the divine and the pagan. At night the beautiful religious images are borne silently throug the city streets on the shoulder of their bearers while spring in all its glory is welcomed by the lively atmosphere on the bars´ terrace. During the day there is a unique atmosphere mixing relaxation on the beach with the solemnity of the Old Quarter´s different places of interest.

PILGRIMAGE OF SAN ISIDRO. May. This pilgrimage takes places on the sunday closest to 15th May, when taking full advantage of the arrival of fine weather, the people of Mojácar travel in beautiful carriages bedecked with flowers and accompanied by a band to the hamlet of Sopalmo which lies within Mojácar´s municipal boundaries.

MOORS AND CHRISTIANS. The weekend nearest to 10th June. This fiesta celebrates the heroic deeds which led to the cultural religious interchange between Moors and Christians. This is Mojacar´s most important fiesta and everyone joins in. The hight point comes on Sunday afternoon with a grandiose procession which starts at Mojácar´s highest streets and ends in the lower part of the village, close to the fountain.

FIESTAS DE SOPALMO. Early August. In honor of Cristo Rey. This is Mojácar at its most genuine, when the Queen of the fiesta and her handmaidens are crowned and there is a traditional “corrida de cintas” competition of horsemanship, where riders must spear a small ring hanging from a ribbon.

FESTIVITIES OF SAN AGUSTIN. 28th August. Coinciding with the weekend, Mojácar celebrates its fiestas in honour of its patron saint. Festivities incluide sport, evening celebrations and corridas de cintas.The floral offering merits a special mention: women in traditional Mojácar costume carry their water pitchers full of water and flowers in a procession from the fountain to the church.

CHRISTMAS IN MOJACAR. December. Christmas sees recital of popular carols, activities for children and the New Year celebration in the shadow of the church´s clock tower. This is followed on 5th January by the Epiphany parade. This is a fun family time where everyone, young and old alike, enjoy themselves. 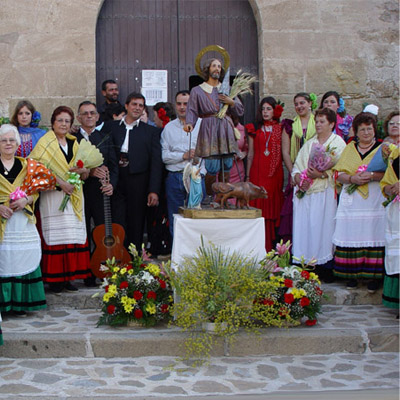 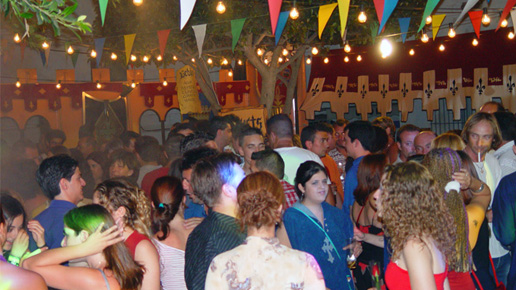 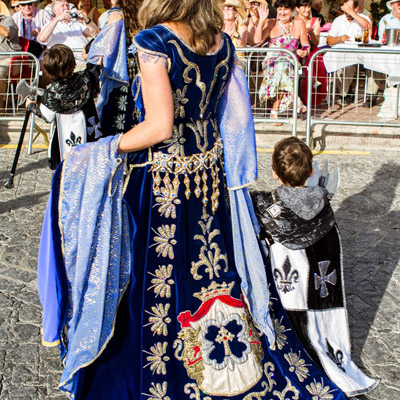 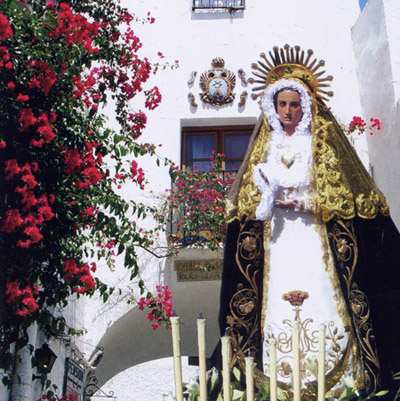 The so-called “muñecos mojaqueros” or Mojácar dolls spainted with red clay were a traditional means of protecting the houses and farmhouses of the Sierra de Mojácar. Several authors have written on the origins and name, linking the symbol’s use to the Neolithic period in the province, the Egyptian Ankh and the explosion of Almeria’s most important cultural movement during the 1950s. SThere is one thing, however on which all agree: this symbol of Mojácar, given the name of Indalo, represents a higher power which protects places and people from danger as well as from ignorance and evil.

It was at this time that the archaeologist J. Cuadrado learnt of the schematic cave paintings in the Los Letreros cave in Vélez Blanco, where one can see a hunter stalking two goats and another figure which H. Breil drew, and which could be understood to be the origin of our Indalo, even though they are not the most important figures in the paintings where the famous sorcerer, the loaves of bread and the suns take pride of place.

For students of the symbol, it can be interpreted as a hunter with a rainbow: a sign of protection from evil spirits or from earthly misfortune. Perceval took this latter to be the symbol’s significance, basing his arguments on the pre-existing Indalos found in Mojácar.

For thousands of years the Indalo, has been a part of our lives, deeply rooted in the province as a whole and Mojácar in particular. 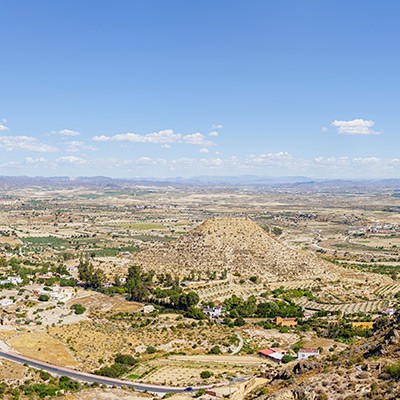 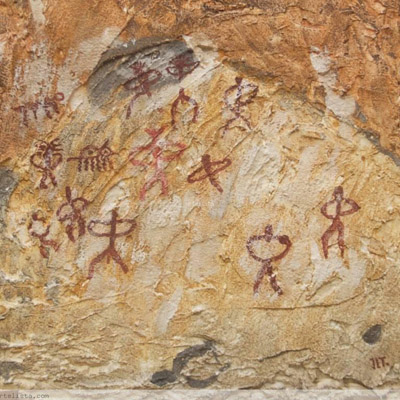 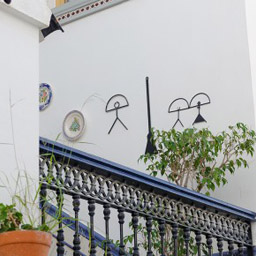 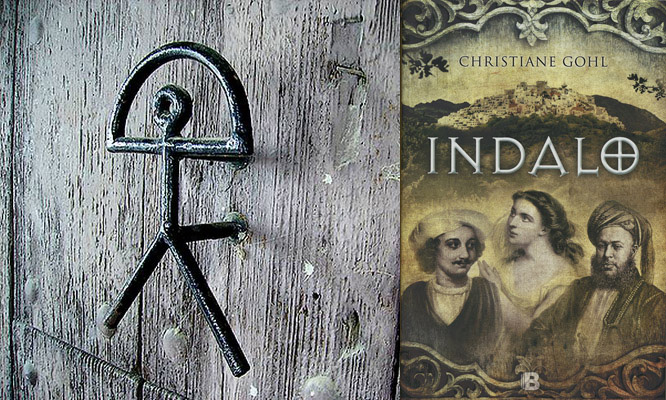